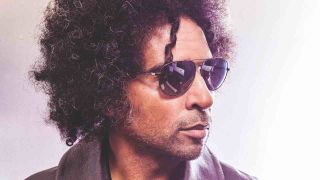 Alice In Chains frontman William DuVall has lived a life filled with music, but as shown by his recent debut solo album, One Alone, he’s still challenging himself to do something new and out of his comfort zone. Here he shares words of wisdom about going your own way, the importance of friends and family, and how writing songs can change the lives of the people around you.

Learn from those closest to you

“During my childhood in Washington DC, the most important thing was my discovery of music. My older cousin Donald moved in with us when I was eight, bringing along his small but very powerful record collection. So that was the real impetus for me discovering music on my own terms. He had everything from Santana to Roy Ayers to Weather Report, to the thing that really captured my imagination the most, the Hendrix album Band Of Gypsies. That fired my imagination to playing guitar myself. Hearing the Band Of Gypsies was the galvanising force in terms of me thinking, ‘Wow, I want to do that. I have no idea how he’s doing all of that, but I really wanna do it.’ Donald was a great listener and a great mentor. It was a really great awakening.”

“I discovered this really beat-up nylon-string acoustic guitar in my grandmother’s basement, that my uncle had abandoned long before. So I’m fooling around with this terrible guitar, trying to get a sound out of it. But that was the beginning, it was enough to get me going. When Donald joined the navy, I was about nine years old. I had been playing guitar for about a year, and was getting more proficient, so with my cousin’s first paycheck from the navy, he bought me my first electric guitar, a brand new Fender Mustang. He showed me how to wire it through the stereo, so I could use it as a makeshift amplifier.”

Stick to  your guns

“My discovery of music and being determined to pursue it as a career, that created its share of conflict in my family. My folks, particularly my mother’s side, are very education-oriented and very aspirational in terms of career choices. So my mother saw me becoming a lawyer or maybe a college professor. But in the end my pursuit turned out to be justified. Now they can see very clear, demonstrable success, so it’s all good.”

“My mother would drive me to shows when I was under-age. You could only go if you were on the bill in the opening act, or if you had a guardian or parent to accompany you. So sometimes I was actually on the bill, because I started playing in bars and clubs when I was 15. But more often than not, I’d sneak in and get caught and thrown out. Sometimes it would just be a matter of begging my mother to take me to a show. She sat through a lot of insanity in the early 80s because she was there at the back of the room when Public Image Ltd were playing on the Flowers Of Romance tour, or the Ramones were playing on the Subterranean Jungle tour. Lots of gigs that I’m sure were not her taste.”

Some rock heroes are on your side

“My mother even let Jello Biafra assume responsibility when I got thrown out of a Dead Kennedys gig. The manager of the club watched me at the payphone as I called my mother to come get me. She had to drive all the way back into the city. And then Jello Biafra discovered me out the back of the club by the dumpsters, throwing rocks because I was upset. He asked me what the problem was and I told him, and he said, ‘That sounds like South African-style apartheid! I’ll assume responsibility.’ So my mother showed up back to the club to get me, and I brought her around the back of the club and introduced her to Jello Biafra. And again, to her credit she let it go and I got to see that show.”

Create your own scene

“Washington DC had one of the greatest emerging hardcore scenes ever. Right as I was discovering all of this we moved to Atlanta where there was literally nothing going on. But it actually turned out to be great because in true punk rock fashion we had to create something out of nothing. My friends and I got to be the pioneers carving our way through the jungle with machetes, and creating a space for youth- oriented, youth-driven speed rock. There was no thrash in Atlanta; we made it. There were no all-ages clubs, then we made it happen. It seemed like tough going a lot of the time, especially since my second band was called Neon Christ, and we’d moved to the Bible Belt. The police hated you, your teachers hated you, your parents certainly couldn’t stand it. If you could get it together enough to enter a studio the engineers hated you. I never adopted punk fashion trappings, but the kids who did, you took your life in your own hands walking down the street in those days. You’ve got a lot of rednecks and they were itching to beat somebody up for any reason. Neon Christ had political message in a lot of our songs, stuff that ended up influencing bands like Rage Against The Machine. It was that kind of outlook set to this music that people found inherently threatening. I still have adults coming up to me to this day that tell me, ‘When I was 15 I got kicked out of school for writing your band’s name on my notebook.’”

“I had this band called Comes With The Fall in 1999. We landed in LA and hit the ground running, playing gigs anywhere that’d have us. A mutual friend turned [Alice In Chains guitarist Jerry] Cantrell onto us. He said he had the exact same reaction to our first album as he did to Appetite For Destruction: at first he didn’t get it but then he was all in. We met in a club in LA and then he was hanging out with us every day after that. He moved into the apartment building we were in because he was there so much. It was that close-knit. He was playing with us every gig we played in Hollywood. People thought he was joining our band. He even substituted on bass for us when our bass player got locked up in Atlanta – he’d passed a joint to an undercover cop, got busted. Cantrell wanted to play some shows for his Degradation Trip solo album. We ended up being his backing band and the opening act. It gave Cantrell and me a lot of history and thousands of road miles. We were living on top of each other on a bus for two years. You get to know people under those circumstances. So when you fast forward to 2006, the reincarnation of Alice In Chains, it was not out of the blue. Years of history informed that whole thing.”

“I had a lot of hang-ups and trepidation, psychological blocks, about putting out music under my own name. I’ve always been a ‘band guy’. The idea of putting out a William DuVall solo album weirded me out for some reason. But it just seemed to work out organically, the way the best things in life usually do. It’s intimate, it’s just me by myself. It’s one guitar and one voice for the whole album, which is a huge ask for the listener, but if I was going to say, ‘This is a William DuVall album’, this is.”

Tribalism in rock is nothing new

“I don’t consider myself a member of any scene. But there was a lot of tribalism in punk rock and hardcore in the early days, and the old punk versus metal thing. If you had long hair at a punk show, you were getting the shit kicked out of you. Or if you as a punk rocker turned up to a heavy metal show, you’re getting the shit kicked out of you, end of story. I don’t worry about it, because I’ve always seen how pointless it is. My favourite bands always went the way they wanted to go. Hendrix went the way he wanted to go. Miles Davis, John Coltrane, Black Flag, they all did it their way. Bad Brains, they were the greatest thrash band that ever existed, and imagine those guys being that good at a certain kind of highly musical, virtuosic hardcore speed rock and then they decide to go reggae on your ass. You’ve got this audience of testosterone-filled boys ready to wreck a room and mosh all over each other, and then those guys drop a dub thing. How pissed off those kids would get, man?! And that’d only make Bad Brains play the whole set that way!”

“These solo shows have been really cool. It’s beautiful. I had a guy ask to propose to his girlfriend onstage in Minneapolis. It was wonderful. This album is so intimate by nature, it really does lend itself to self-reflection in the listener. One fellow wrote to me saying he’d just got back from the hospital at the birth of his first child, his newborn son. He put the LP on the turntable, sat on the sofa and just wept tears of joy listening to the music. There are just these amazing stories like that. I had this 12-year-old kid in Washington DC show up. He was standing at the merch table with his mother having just seen the show, and he was crying because he said, ‘Now I know I can play this music that I want to play.’ Because he got made fun of at school, kids were hassling him because he wasn’t listening to hip hop. I hope this kid shows ’em all, just like I did.”