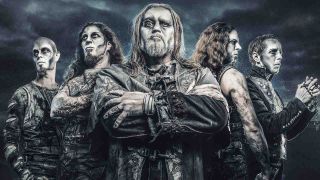 No country does power metal like Germany, and no German band does power metal quite like lupine lunatics Powerwolf. The five-piece who formed in the city of Saarbrücken in 2003 have taken a fascination with the mystical (and sometimes sinister) rituals of the Catholic church and an unhealthy obsession with the animal which gave them their name and fashioned them into some of the most grandiose – and occasionally tongue-in-cheek – heavy metal you can hear.

It’s an approach that has paid off. Their 2018 album The Sacrament Of Sin reached Number One in their homeland, while the rest of the world is fast catching up. The band’s forthcoming greatest hits album, Best Of The Blessed, includes a re-recorded versions of songs stretching back to their 2005 debut, Return In Bloodred. “We had been drinking when we came up with the idea,” concedes the guitarist. “But it turned out to be a pretty great thing to do.”

We’ve tamed Greywolf for long enough to get him to cast an amber eye back over his band’s career and pick out the ten Powerwolf songs guaranteed to get your average metal fan howling at the moon. Be warned: those teeth are sharp…

For some of us in the band, Iron Maiden is the reason we started playing heavy metal. This is a song that’s a pretty clear Maiden tribute. When we founded Powerwolf, we were not even considering being a power metal band. It was, like, ‘Let’s write some melodic heavy metal.’ We ended up being called 'power metal'. That's fine. You have to give a child a name.

We have a morbid fascination with the church. It’s not judging or discrediting anything – I love going to churches, not because I want to attend a mass, but because I’m fascinated by the centuries-old architecture and the madness that went into creating. And the Bible is the most influential book in the western world. But that song makes it pretty clear that we’re no religious fanatics. I basically came up with the title because it rhymes. It’s very tongue-in-cheek. I couldn’t imagine being creative if you were dead serious about everything.

That was the last song I had written for the Battle Of The Beast album. It was two days before we were due to finish and I called the band and said, 'I've got another song.' I kind of forced everybody to put the song on the album. The first time we played it live, everybody was blown away by the dynamics of it. Onstage it exploded. We have not played a single show since 2009 without playing Werewolves Of Armenia.

I wrote the chorus line on the toilet of a sushi restaurant. It came into my head while I was eating. I thought, ‘I need to go to the restroom and whistle it into my mobile.’ It starts with a little bit of Latin, but if you look at it, you’ll know that nobody speaks Latin in the band. Grammatically, it’s total crap sometimes, but I love the atmosphere and mystery it gives.

This one came to me in a pizza restaurant. No, I’m joking. We had this line ‘Amen and attack’, which is a mix of religious symbolism and just going wild. We shot the video at a lake in spring. We got there in the morning and the director said, ‘No, we have scenes at night.’ So we were waiting for 16 hours in full make-up, and it was freezing cold. I had my last scene on a rock in the middle of the lake. They rowed me out in a little boat. It was 3am and I was freezing my ass off. And when I started my first take, the power generator went off. It was, like, ‘That’s it, goodbye, we’re done.’ I was quite angry.

Obviously, we moved from werewolves to vampires on that. For me, it’s all about mystic creatures – I’m not fussy which ones. But there is a twist with We Drink Your Blood, because that’s part of the Catholic liturgy: they drink the blood of Jesus. That was the implied meaning. I enjoyed the ambiguity. You can see it as, 'Let's party', or you can dig deeper.

The title is the perfect description for how we are as a band. The 'blessed' stands for the religious, epic side of things. And 'possessed' stands for the madness going on in the live shows. It's one of the most archetypal Powerwolf songs - if someone asked me to play them one of our songs to show them what the band is about, I would choose this.

I’m a big fan of cheesy ballads, but when you’re younger and all about heavy metal you have to keep that quiet. But years ago we were on tour, and Attila [Dorn, Powerwolf vocalist] and I were talking on the bus early one morning and we both confessed that we loved ballads. We promised each other that would write one no matter would. When I came up with the title Where The Wild Wolves Have Gone, Atilla said, ‘Isn’t that the perfect title for the ballad we’ve had planned for all these years?’ We were like, ‘Let’s go for it!’ And people loved it.

When we were recording the song, Attila did his last take and he started dancing. We said, ‘Well, it’s a song to dance to’, and we started talking about nuns dancing to it. We said, ‘You know what – let’s give the idea to the director of the video’, and that’s what we went with it. As a heavy metal band, you’re not supposed to have videos with people dancing in them. Especially not nuns.

Our first album was a great adventure. We had no plan, we just did it. It was a great time of finding ourselves. In those early days, we had a lot of classic rock influences, less power metal – Rainbow, Deep Purple – and you can hear that on the original Kiss Of The Cobra King.

We decided to re-record it for Best Of The Blessed, because we all liked the original chorus but not so much the rest of the song. So we totally rewrote it. Our approach was, ‘Let’s imagine we have written the chorus line now – what would the rest of the song sound like?’ We were aware that re-recording songs for Best Of The Blessed could be dangerous, but it turned out to be a pretty great thing to do.

Pre-order Best Of The Blessed now

While you’re here, why not take advantage of our brilliant new subscribers’ offer? Get a digital pay monthly subscription for as little as £1.78 per month and enjoy the world’s best high voltage music journalism delivered direct to your device.