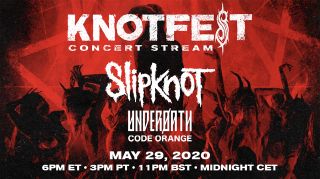 Like much of the music world, Slipknot were forced to cancel their summer touring plans because of the coronavirus pandemic.

The band were due to kick off their Knotfest Roadshow across North America this weekend, while their planned Knotfest UK and Knotfest At Sea events were also shelved.

But Slipknot have come up with a way to keep fans entertained this coming weekend when they’ll host a Knotfest Roadshow streaming event “covering the very best of art, music, culture and media for fans of heavy culture.”

It’ll get under way tomorrow (May 29) at 11pm BST on the Knotfest website and will feature exclusive concert streams and interviews with Code Orange and Underoath.

Fans will be able to enjoy  Slipknot’s 2019 headline set from Graspop in Belgium  which was captured following the release of We Are Not Your Kind. The stream will also feature an exclusive interview with Shawn ‘Clown’ Crahan, conducted by Ryan J Downey.

Code Orange will stream their Last Ones Left: In Fear Of The End set that was broadcast live on Twitch back in March, and will also include a segment of Clown’s Electric Theater chat with Code Orange’s Jami Morgan.

Underoath, meanwhile, will stream their performance from The Brooklyn Bowl in Las Vegas from 2016 – a set which saw the band revisit their 2004 album They’re Only Chasing Safety. The stream will also include  a portion of Downey's Deep Dive interview with Underoath’s Spencer Chamberlain.

The Knotfest website will also feature curated playlists, playthroughs and more along with the shows Mosh Talks With Beez, The Deep Dive, The Electric Theater and The Downbeat.

In addition to the music and interviews, fans will be able to get their hands on a range of Roadshow merch during the 72 hours the stream will be available for.

As well as an in-depth look at Gray’s story and the influence he had on Slipknot’s music, the magazine also features a special collection of tributes from around the metal world.

The issue also comes with £10 of exclusive bonus digital magazines and a brand new, specially curated digi-mag counting down the 20 greatest Slipknot songs ever – and the stories behind them.