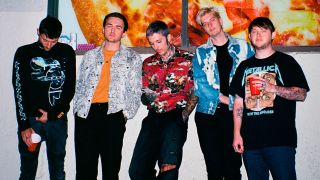 As we get more and more used to this new way of life – or 'the new normal', as we're now well used to calling it – one thing has become clear: now more than ever, we need an abundance of excellent music to see us through the days.

Well, you're in luck, as we have a host of musical friends to keep you occupied with playlists they've put together while in lockdown.

We've already heard from Trivium's Paolo Gregoletto, who shared his Ultimate Quarantine Jams, from Halestorm guitarist Joe Hottinger, who provided his favourite throwback tunes, from Jamie Lenman who took us all to the movies, from Sepultura's Andreas Kisser, who put together a list of the world's most badass guitar solos for us and from Celtic Frost mastermind Tom G Warrior who supplied us with his quarantine soundtrack, among others.

Today, we're joined by Derange vocalist Cat Pereira, who is guiding us through the essential Bring Me The Horizon songs every self-respecting rock fan needs in their life.

"Bring Me The Horizon is possibly one of the biggest bands at the moment," says Cat. "From where they started with deathcore roots to where they are now, a Grammy nominated band, I just have the upmost respect for them.

"I think that in past few years, we’ve seen this band go outside the norm and do their own thing, and I’m always excited to see what they come up with."

Her playlist is below, along with a list of commentary to guide you through the tracks.

Shadow Moses: I have to say Sempiternal is one of my favourite Bring Me The Horizon albums and this track is great! This was the band’s comeback since There’s Is A Hell and I loved how they upped their game in terms of production and songwriting and when this song was released, that was it for me. You can’t just simply listen to this song and not shout ‘This is Sempiternal!’

The Comedown: I had to bring a bit of old school vibes to this playlist. It’s a banger! It just comes on swinging and I love how they brought it back at their show at Alexander Palace. Even though the band has developed since then, it’s good to go back to the classics.

It Never Ends: This was the song that saw Bring Me starting to experiment more with production that’s for sure. It definitely brings back nostalgia and I love going back to it. The lyrics are still relevant to this day.

Throne: This song was definitely my anthem when it first came out. I remember it like it was yesterday, I was in Camden just leaving a gig and it had just been released and I was absolutely sold by the hook. It was a different sound from what we were used to listening by Bring me but it just worked and the production is great. Definitely one of my top songs.

Sleepwalking: I think this is one of the most melodic tracks that Bring Me have. Again an anthem tune and a banging chorus which shows a more melodic side. Again with their album Sempiternal it’s such a breath of fresh air to see Oli showcasing more melodies in his vocals but still keeping the heaviness of the whole sound.

Avalanche: Yet again another anthem. It’s a huge tune, seeing this song performed live in an arena is amazing and the first line of lyrics ‘Cut me open and tell me what’s inside’ is in itself incredibly powerful. The whole album, That’s The Spirit, definitely shows a growth in BMTH to a more mature sound and even though the lyrics in it are in a way more simple, they’re powerful and direct and I think it speaks to a lot of people.

Mantra: This song has such a cool riff and so much groove. This was their first new song released after the That’s The Spirit cycle and I was quite nervous when it came out cause I really wanted to like it. Then I heard it and I did love it! Groove, hook, awesome music video as well, the whole package.

Drown: Fun fact, when they played this song on an acoustic at Alexander Palace, I was an absolute emotional mess. It’s a beautiful song with powerful lyrics and it speaks to a lot of people. The choir behind it makes it so epic and it’s a huge sing along.

Wonderful Life: I wasn’t expecting the beginning of this song to come out swinging. The groove, the heaviness, it’s all there! The chorus has this contrast between this happy melody and dark lyrics, which I love. Anyone who goes through slight inner crisis can relate.

Nihilist Blues: This is by far the most different BMTH have ever been. It definitely divided the audience because we’re not used to listening to this sound coming from them. But it’s awesome that they went there. It’s a great track whether it’s rock or not, and it brings an ethereal touch to its EDM vibe. And it features Grimes – I mean… hell yes!