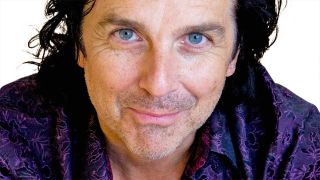 It’s been thirty years since Steve ‘H’ Hogarth took over as the singer in Marillion.

During this time the band have pioneered new ways of making the music industry work for them, and evolved into one of the most creative and complex (yet listenable) forces in modern prog rock.

Here, the former Europeans frontman recalls how The Blue Nile and David Bowie made him the musician he is today, and why he’d never have made it as a Beatle.

The first music I remember hearing

What Kind Of Fool Am I by Anthony Newley. My dad used to go around the flat humming that. The first record I bought was The Beatles’ She Loves You, it was also the first single Steve Rothery [Marillion guitarist] ever owned, which shocked me. We found that out a few weeks ago as we were being interviewed together.

Most of the Beatles hits weren’t as long as the intros to our songs, I’m not joking! That’s one of many reasons I wasn’t in The Beatles.

The greatest album of all time

David Bowie's Hunky Dory. There’s something radical and cool about that album. That innocent charm, it’s like there’s nothing between the talent and what you hear, and it’s got Life On Mars? on it, which would be enough for most people.

Adrian Belew, because of his radical approach and the stuff he did on things like [Talking Heads album] Remain In Light. We did Cruise to the Edge a few years ago and he’s got a thing called the Adrian Belew Power Trio. He’s got that thing that Eddie Van Halen’s got; he’s so fucking good it’s all a laugh, there’s no knitted brow about any of it, it was all pure joy, but technically incredible.

Leonard Cohen. He wrote Famous Blue Raincoat, I rest my case. His words, the way he constructed songs. Some people want the perfect pop song; I want to feel like I’m in a short story and have my heart broken halfway through. You can’t beat Leonard Cohen for that.

The first song I performed live

A Day In the Life, on stage at my school. There was some kind of revue in the sixth form and I got up and did that. How did it go? I don’t bloody know! It was just me and a piano, it seemed to go down alright, but they’d have cheered anything, that lot.

The most influential live album on me was Made In Japan. At seventeen Deep Purple opened a door for me; I went to see them at Sheffield City Hall and thought ‘nothing is better than doing this’. That was on the Machine Head tour which became the Made In Japan album. When you went to see bands like that at that time, they were making noises no one else had made.

Those things are staples now; a screaming Strat, a heavy metal lead singer, the Hammond, but they hadn’t been listening to heavy rock, it didn’t exist, they’d been listening to the blues and jazz, but there they were making this incredible noise. ‘What on earth is this?! It’s amazing!’

The worst record I made

That’s easy; I was in a band called Harlow and we released a single called Harry de Mazzio, this must have been around 1977. I think the band was named after Jean Harlow as opposed to the town in Essex, and we had a single on Pepper records. It was a song that I wrote, which was dreadful and that’s definitely the worst record I ever made. I think they only pressed about six copies.

Does everyone say Tin Machine? The Frog Chorus? I know Macca did it for his kids, but perhaps he should have kept it as a home recording and played it for them at night? That said, he’s Macca, he can do anything, he’s beyond reproach.

Not a going out song, but when I was at college, we used to have an alarm clock song, which was Round Goes the Gossip by Focus. It’s on Focus 3 and it is totally mental and if you use that as an alarm clock it really will get you out of bed and set you up for the first few hours of a Monday morning.

My roommate used to set up the record player with the stylus in the groove and then he’d lean out of bed and hit the switch and off it would go.

The most underrated band ever

The fucking Europeans! Seriously, maybe The Kinks, they were nowhere near as big as The Beatles and maybe they shouldn’t have been, but they should have been right on their heels in how they’re remembered. Ray Davies wrote amazing songs; Days, that stands up to anything the Fabs knocked out, just about.

The song that makes me cry

Family Life by The Blue Nile. Achingly sad and anyone who’s ever had any domestic problems, and I’ve had a few, it just hits you, this unbelievably sad and truthful song. I love The Blue Nile.

My 'in the mood for love' song

Sexual Healing [Marvin Gaye] takes some whacking, as it were. Or This City Never Sleeps by the Eurythmics. Dave Stewart is a genius and Annie Lennox is one of the best female singers to have walked the earth.

The song I want played at my funeral

I wrote it, it’s called Arc Light and it’s a song from an EP of the same name by me and Richard Barbieri. Those words are what I want at the end, those are my waving goodbye words. I could have died after I’d written that, because that’s how I feel about dying.