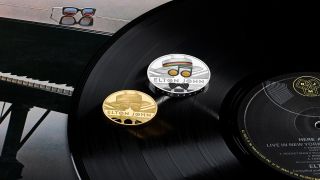 The Royal Mint have released a set of commemorative coins to celebrate Elton John’s career.

The collection is the latest in the Royal Mint’s Music Legends series, which began back in January when a range of Queen coins were unveiled.

Elton says: “It really is a fabulous honour to be recognised in this way. The last few years have contained some of the most memorable moments of my career, and this is another truly humbling milestone on my journey.”

Divisional director of commemorative coin and The Royal Mint Experience Clare Maclennan, adds: “Elton John is without a doubt a British music legend and is recognised as one of the most successful singer-songwriters of his generation.

“We are delighted to honour Elton’s significant contribution to British music on a UK coin. This is the second coin in The Royal Mint’s new Music Legends series, marking the work of our exceptional British musicians.”

The Royal Mint and Elton are also now working on a  one-off collector’s piece which will be auctioned later this year.

Money raised from the auction will benefit the Elton John Charitable Trust, with the collaboration brought together thanks to a partnership between The Royal Mint and Bravado –  Universal Music Group’s merchandise and brand management company.

The Elton John coins are now available to purchase.

Last week, the first of six shows from Elton John’s archive was broadcast on YouTube. The Classic Concert Series will continue this coming Saturday with a show from Sydney, Australia, from 1986.