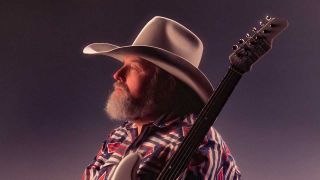 Charlie Daniels has died at the age of 83.

The news was confirmed in a post on his website, which read, "Country music and southern rock legend Charlie Daniels has passed. The Country Music Hall of Fame and Grand Ole Opry member died this morning at Summit Medical Center in Hermitage, Tennessee.

"Doctors determined the cause of death was a hemorrhagic stroke. He was 83. Funeral arrangements will be announced in the coming days."

On the singer and fiddle player's Facebook page, a version of Daniels performing the hymn I'll Fly Away live was posted in tribute.

Daniels was born in North Carolina in 1936. He learned to play guitar, fiddle, banjo, and mandolin and became a session musician in his twenties, co-writing It Hurts Me – released by Elvis Presley as the b-side of Kissin' Cousins in 1964 – and playing bass on three Bob Dylan albums: Skyline, Self Portrait and New Morning.

He achieved his first solo success in 1973 with the spoken word single Uneasy Rider, and over the following two decades would score a number of hit albums with The Charlie Daniels Band, who, along with the Marshall Tucker Band, were among Southern rock’s most country-orientated exponents.

The hits included the multi-platinum Million Mile Reflections, released in 1979 and featuring the classic – and unlikely UK Top 20 hit – The Devil Went Down To Georgia.

"I never cease to be amazed by what that song has done for us," Daniels told The Oklahoman last year. "A friend of ours that’s mountain climbing, he’s over in Chile, and he sent a note and he said, 'Crossing over from Chile into Argentina and Charlie’s on the radio doing Devil Went Down to Georgia.'

"So, it's definitely a high point of the night. We close with that. There’s nothing we have to follow it with. We’ve climbed all the heights we can, it’s time to leave."

Daniels was most recently seen in action last month with The Beau Weevils –  Daniels, James Stroud, Billy Crain, Charlie Hayward and friends – performing a lockdown version of the song Geechi Geechi Ya Ya Blues.

In 2016, Daniels was inducted into the Country Music Hall of Fame.