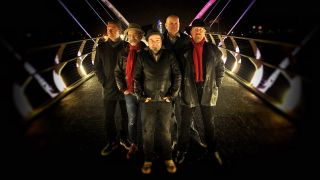 Scottish prog rockers Abel Ganz have announced they will release their new album  The Life Of The Honey Bee, And Other Moments Of Clarity through Abel Records on July 6. It's the band's first new album since 2014's Abel Ganz.

The new album is a conceptual work comprising of six thematically linked pieces exploring our relationship with memory and loss. The liminal space between a fading ‘what was’ and an anticipated ‘what is to come’.

“We have all pushed ourselves so incredibly hard on this record in an attempt to make this the best possible ‘complete work’ we could make,' drummer and producer Denis Smith tells Prog. "Everything on the record is interconnected and is there for a reason – right down to the guests we chose to play specific parts, the spaces we chose to record in, to the artwork – everything!

"We deliberately set out to avoid simply repeating what we did last time – we hope we have taken ourselves in to new areas (amazingly - the band’s first concept album), while still retaining that ‘Ganz’ touch. On the production side of things – it’s a source of great personal pride that we have been able to collaborate and work with such skilled professionals such as Simon Vinestock and Jacob Holm-Lupo. These guys are at the very top of their game and they have helped us to raise the production values to a much higher, professional level."

Pre-order The Life Of The Honey Bee, And Other Moments Of Clarity.